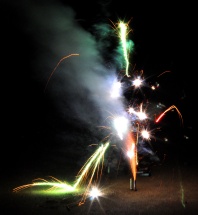 It wasn’t much, really. Just a few fireworks and champagne glasses with champagne for the grownups and cola for the girls and a clock set forward two hours so that it read midnight for the doubly-excited Livi and Maggie. I’m not sure if Maggie even understands the concept of the new year, but she understood that there was a celebration involving sparklers and fireworks and even if the fireworks were not impressive to the worldly, the savvy…they sure were impressive to five and six year old girls who looked on this as the most magical of all possible events…wondrously filled with fire, noise, and smoke, and staying up late, even if midnight wasn’t actually midnight. Few things could match the joy of their exuberation. Old hearts rejoiced in the innocent wonder of the fresh and young. We shared in the wonder of their wonder. The dogs did not like it nearly so much as us, but they have their own idea of fun which did not include fireworks as much as it likely included chased rabbits and leftover beef stew; nor did it likely include any new year’s celebration, since the nature of a dog’s measurement of time is unfathomably enigmatic to us humans.

I got out my camera and tripod and took a few time-exposures of the fireworks, freezing them in stillness and motion, which seems impossible to have both at once. A photograph is a visual snippet of a moment frozen in time, but a time-exposure captures the passing of time, however brief, freezing it, allowing you to see motion in stillness. It is not complicated, and the results are easy to achieve since fireworks provide their own light for the photo. Photography is all about light, and there, with fireworks as with lightning, is the light itself, impatient and hasty to record itself onto your image sensor, bursting with heat, motion, and a released energy…just like the children…just like us adults enjoying the boundless joy of the children. Not the grandest stage, not the most vibrant scene of New Year’s abandon could have matched the simple pleasure of watching my own grandchildren rejoicing at the sheer joy of life. No one could have enjoyed or been more pleased at my presence than those grandchildren of mine. If one will pause long enough, one can surely see what matters. 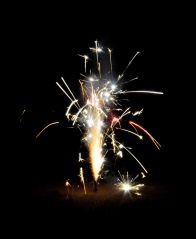 I heard from my friend Ken Hart who had written a poignant missive about the year past. Ken is a songwriter like me, but far more serious about it. He and his lovely brood of girls make their home in Nashville. We exchanged a few emails which got me to thinking about music, its future as a business, the passage of time, lost loved ones, old friends, new friends, and so forth and so on. It is remarkable what one will pause to consider in the course of answering an email that is filled with so much to think about.

In the haste of modern life, which has always been modern to those personally involved in the process of living it, the pace demands that we sample. Even much of our music today is sampled. A sample here, a sample there, we are overrun with samples so that we seldom make the time to become intimately acquainted with anything. Our haloed-star shines brightly, intensely, and burns itself out in just a few moments just like the fireworks placed on the concrete driveway and lit to sparkle, spew, and sputter. They are far more impressive than the concrete upon which they sit, yet they are gone in a flash while the concrete remains. If you look in the photographs, you can plainly see the concrete illuminated by the fierce burning light of the fireworks. The concrete does not care, nor is it impressed by the wonder of the bright spews of flame that rest upon it. It stays solidly under our feet, not moving, not responding, seemingly permanent, far more permanent than the flash of the fireworks, but on a grander scale also subject to decay, disruption, and deterioration as are all things living, or all things made by living things. Ashes to ashes…dust to dust. 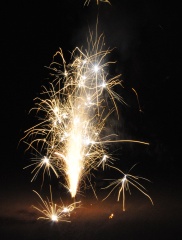 ntime, measured by completely different scales, both the fireworks and the concrete driveway have served us. One abruptly in a flash of brilliance, and the other faithfully, over a long ‘spanse of time (at least to my reckoning of time). One is worthy of a photograph; the other only worthy of feet, the tires of cars and children’s bicycles, and pressure washers and brooms. One reliably unpredictable, while the other requires no thought about it, since it only had a brief span of fluidity and movement as it was poured into a form that contained it until it returned to being the limestone it was before it became concrete. Even its once dynamic fluidity was slower than the brightness of the fireworks.

If you could ask the concrete about the celebration it witnessed, the words in the question would likely pass too fast for it to comprehend. “Uh…..whaaaat?” it might ask in return. Repeating the question would bring no better result, since concrete moves at its own pace, still hardening, still losing its liquidity every year, every day, every second. It is surprisingly dynamic to be so static.

If we had tools sensitive enough, we could measure the fluidity of something that appears to be solid. If we had eyes sensitive enough, we could see the mostly empty space that makes up the solid objects that surround us, since there is space between atoms…and lots of it, but the scales of measurement are all of a nearly infinite difference. This is a good thing, for if we saw everything that could be seen, we would really see nothing, having sampled ourselves into a wash of ones and zeroes that our brains don’t have enough processing power for. Humans are not digital creatures…we are analog. We have to interpret what we observe to make sense of it, but with that comes the wonder of being human…the variety of experience that comes with savoring not sampling. So many times, less is more; but you have to slow down to get more out of the less. I have slowed down. I can’t move much slower. Yet the slowness I formerly despised has yielded a richness I would not trade for 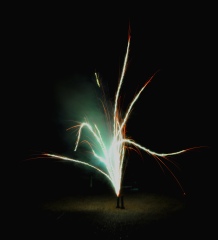 what I once had, which seemed at the time to be the need to be everywhere at once, tasting everything at once, yet savoring nothing, digesting nothing, embracing nothing. In the embrace of everything is the embrace of anything and having embraced everything one finds nothing but bits and pieces; having been embraced by them, there is no satisfaction, no fullness. The processing of the bits and pieces is a mechanical function of our brain…the savoring and the contemplation of things is a process of our mind. There is a difference since the mind can imagine and wonder.

“Metaphysics,” I say to myself, in wonder. “Useless metaphysics.”

“But a life without metaphysics is a life filled with ones and zeroes…there is no wonder,” I replied to me. “Why would you want a life like that? You’d be like the fireworks that shone brilliantly, violently, and sputtered out, or you’d have all the dynamic fluidity of the concrete; you could never have both.”

“You don’t know what you’re talking about,” I chided me, and chided churlishly, I might add.

“My point exactly!” I said in triumph, having trapped myself without realizing it. “Isn’t it wonderful?” 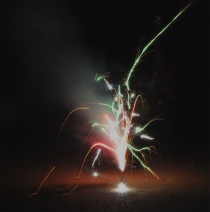 d my own point in this remarkable revelation of myself to myself. It may seem unremarkable to you, but obviously not to me since my remarks are here for you to see. I will savor this for a little while, or maybe all day, or at least until the bowl games start up, or until Mama and Debbie call and say that the black-eyed peas, hog jowl, turnip greens, and cornbread are ready to eat, which is traditional New Year’s Day fare here in my Southern home. I will savor each bite. I will use all the salt I want, since salt adds savor and savoring is what I will be about, today, amid family, and football (which is about the only thing on TV worth watching if you ask me), and amid peace and plenty.

I will savor the memories of two friends who savored their last earthly experiences yesterday: Mr. Harvey Henson and Mr. Bill Anderson. I will savor the friendships of those who, like me, are engaged in this remarkable, perennial, on-the-job training experience we call life, hoping that we all learn to exchange sample for savor, and toast those whose flames burned brilliantly out all too soon like last night’s fireworks, and be thankful for the scales I have learned by which seemingly immeasurable things can actually be measured. I will be thankful for a brain and rejoice for a mind since I need them both, such as they are…they are all I have to work with. We must make use of what we have at hand, else the wanting of what we lack paralyzes us to doing. We can remark on our dearth, but we must get about the business of living with what we’ve got, for the thoughts of what we lack can be overwhelming if we let them. 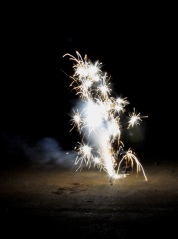 With so many remarkable things all around, I will make one more remark as the sun rises on this, the first day of 2014, filled with all the promise of a new day’s sunrise in a brand-new as-yet unsullied year.

“Even with some few remarks, your CT scan was mostly unremarkable,” Hemosapien said.

What a wonderful promise for the new year.

My most sincere condolences and prayers for the Lord’s peace for the families of Harvey Henson and Bill Anderson. Godspeed, friends. Both of you had time to slow down and savor. I wish we could all be so lucky.