We start out life ignorant and foolish, progressing to a point where we know everything with great certainty. We eventually learn to acknowledge our ignorance and, no longer victimized by foolishness, start learning something useful.

I was a victim of my own foolishness for years. I still may be. Others will have to decide as I am not very reliable as an impartial witness on this one, though I am certain that I am less foolish than I once was, and hopefully still yet more foolish than I will be. Live and learn. 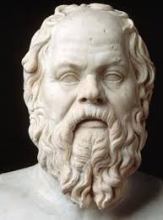 The great Socrates, the teacher we know so well through his brilliant students, Plato, Aristotle, and Xenophon, ultimately had this to say of himself: I only know that I know nothing. His arrival at the place of knowing nothing is a great starting place for learning something.

In the national politics of the mid-nineteenth century in America, the Whigs met their demise as a political party and morphed into the Know-Nothing party. Their political adversaries had a field day poking fun at their name. Who would want to be called a know-nothing? Hmmmmm! Is that not what Socrates called himself?

“I only know that I know nothing,” he said. An admitted Know-Nothing, perhaps he was the founder of the party that took its cue from him many, many nations and generations later.

I suppose it is worse to know nothing when you think you know something than it is to know that you know nothing. The former can be dangerous, as in the case of the Memphis woman who traveled to a motel room in Jackson, Mississippi, to have her buttocks injected with industrial grade silicone so she could fulfill her desire for a bubble butt. She apparently knew nothing about plastic surgery, nor did the person who injected her right before she was admitted to the hospital where she died from what physicians noted as a silicone embolism in her lungs.

I call that a case of not knowing that you know nothing. Well, the unfortunate woman didn’t know nothing…she knew she wanted a bubble butt. She knew she would go to great lengths and expense to acquire one. Those are two very significant things to know, but far less significant than the things she failed to realize that she did not know. I am sorry for her demise.

Knowing even less than the deceased woman was the person who injected her butt with silicone sealant. Apparently the silicone injectoress, who, it is reported, is currently a female after having once been a male, me supposing that in the interim period he/she was what is referred to as a transgendered person….apparently, they did not know the difference between luck and competence, which are frequently mistaken by folks who know nothing. I may not know much, but I do know that being lucky is good and being unlucky will reveal incompetence very quickly. Competence can even founder on the shores of bad luck.

The injectoress also did not know the difference between a registered nurse and someone posing as one, since she claimed to be an RN when she should have claimed to merely be posing as one. In this sad case, there were a lot of unknowns entertained by a couple of know nothings. I see this a lot. Perhaps you do, too; I don’t know.

Knowing nothing can be fatal. Knowing nothing can also be our salvation. It depends on how we approach our ignorance. Realizing we know nothing is the most delightful starting point, but we must be honest with ourselves about what we don’t know. If we continually talk about what we don’t know in an effort to persuade ourselves that we do, surrounding ourselves with others who are just like us, our know nothingness can be reinforced to the point where we know more than is good for us. Knowing something can be the equivalent of knowing nothing; therein is the greatest danger.

I have been guilty of this many times. I have also been the recipient of words from friends that stung at the time, and still sting today, but were true observations and legitimate analysis of how others viewed me; a chance, as it were, to see myself through someone else’s eyes. What a blessing. What a lesson. It was not without some painful introspection, but it led me straight to the point of understanding the wisdom of not knowing, or to be more honest with the reader and myself, of at least adding to the list of things I don’t know quite so surely.

I could provide you with a tediously boring list of all the things I know. I can imagine eyes rolling all around the blogosphere at the mere suggestion of this. Better, I can succinctly point out, in one simple sentence: I only know that I know nothing.

You won’t likely believe either. But the latter? It saves a lot of time, and your doubt about my knowing nothing, since everyone knows something, makes the next thing I tell you more likely to be believed.

You can believe this. If a bubble butt is your goal, obtaining a bargain-priced one in a motel room in Jackson, Mississippi, is possible, but you’ll likely not have much time to enjoy the new you. That’s worth knowing.

While I may be victimized by yet more self-induced foolishness in my life, the search for a bargain bubble butt is highly unlikely to make the list. You can write that down.