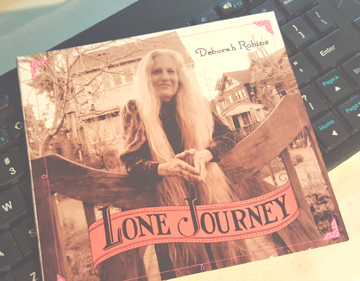 Here lately, I have been blessed to acquire a couple of new CDs. I don’t buy CDs often, anymore, which I suppose is OK since I don’t sell CDs often, anymore. Then again, I don’t download recordings from iTunes or some other digital service, either. As musicians, we can get to the point that unless we are involved in it in some way, we never really give new music a listen. I repent of having felt this way.

I recently opened my copy of Deborah Robins CD LONE JOURNEY. Like nearly every CD I acquire, it sat for weeks unopened, unattended, having made its own lone journey to Mississippi only to be neglected. Eventually, I get around to listening to them, and to attempt to give them a fair first listen, a second, and even a third, particularly if I struggled with the first two. Music can grow on you like that. In fact, it can overwhelm you in the growing. I reckon that is what we are all looking for in any CD: being overwhelmed.

“I am looking forward to being underwhelmed with this new CD,” said no one, ever, though we might as well have in some cases.

When I gave the CD the first listen, it was a rainy day and I was back in my tinkering room, preparing to reload some pistol cartridges. I would be there for a while and decided I would pop in the CD and fire up the old Marantz receiver and listen while I sized cases, installed primers, measured powder, and seated bullets, all of which require much attention. I heard a song or two that made me stop and pat my foot, nod my head, but was absorbed in the bullet re-loading process, which, by all rights, requires the proper attention be paid lest some critical step me mishandled, which may only become apparent later, much later, and perhaps rather dramatically. In other words, my first listen was not a fair one. I resolved to listen again, having liked what I heard but was not grabbed.

Of course, I listened about five times to It’s My Lazy Day in the process of the first listening. This Smiley Burnette tune is one of my all time favorite songs. I sort of got it stuck in my head and sang it to myself as the rain and the handle on the bullet press continued to come down. It was my lazy day, too, Deborah and Smiley. I have been courting lazy days lately. I send them flowers and candy, hoping to have my way with them.

I don’t think my second listen was a fair one, either, as it also occurred in my man-cave, though instead of loading bullets, I was sewing on some leather project, once again absorbed in the task at hand, thoroughly enjoying myself, never making it really past Deborah tempting me with ol’ Smiley’s Lazy Day. If Smiley was too lazy to go fishing, I was too lazy to work on this leather project, or to listen to a CD. I sat in my favorite chair in my man-cave and went to sleep. When my wife roused me I was in the middle of dreaming, “Well never mind calling, cause I ain’t coming,” over and over, but failing in its real-time implementation.

It took a three-hour road trip this past Monday, and remembering to bring the CD with me that precipitated my first really fair listen. And the second. And the third. Now, I was hooked after the first, since driving down the road all you can do is listen, and having already had It’s My Lazy Day under my belt, I was able to get beyond it and into a world of folk songs I had never heard.

Other favorites were Oceana Roll, We’ll Camp a Little While in the Wilderness, Weevily Wheat, a sultry Take it Slow and Easy, Rocky Mountain Rose, Just Take It the Way It Comes, and Dance Boatman Dance, which I will in all likelihood appropriate for myself in future performances of my own.

I have not yet mentioned the title cut. I am not really prepared to. I must take a deep breath before I can continue. Whew!!!

Your Lone Journey got under my skin. It overwhelmed me. One voice, one softly played tubby banjo accompaniment, sparse, Spartan, a voice communicating, singing  directly to my soul.. I had sung along with several songs on the trip, but this one got next to me. I sang harmony with Deborah until my voice gave out. A mournful song has a powerful amount of joy in it if you can reach it, or rather, let it reach you. This one brought tears. There is nothing I like more in music than to be moved to tears. Deborah has this knack, or at least she has this effect on me, as she moved me to tears the first time I ever heard her voice, sitting next to me in a morning song-pull at a music camp in the Sierras as she sang Utah Phillips’ Nevada Jane. It was all new to me at time: California mountain early morning song-pulls, Nevada Jane, and Deborah Robins. I can’t say that I’ve ever recovered, or that I ever thought I needed to.

Deborah is accompanied on a few songs by the masterful guitar playing and Jew’s Harp thumping of her iconic folksinger husband Larry Hanks. Larry’s musical credits include Janis Joplin and go on from there. He is a remarkable performer and a friend. They both are friends, and both stellar performers together or separately. Just Take it the Way It Comes!

Lone Journey is available through all digital music outlets. I suggest you acquire it if you like uncomplicated music that can only be complicated by the emotions it pulls from within us, which, it turns out, is no complication at all, but rather a hoped-for side-effect that soothes.

Note: Buy the CD. I’d rather have a CD in my hand than ones and zeroes on my phone, tablet or computer. Better yet, support the artist and buy it directly from them!