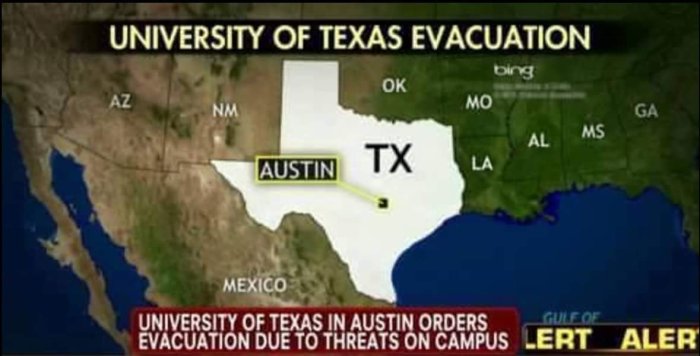 Not only did Harvey send Mississippi scurrying east of Alabama, apparently Missouri has annexed and expanded into Arkansas which had taken a late summer vacation in Hawaii until the bad weather cleared. Upon hearing this, Missouri went down there just to see for itself. Several now-former Arkansans who had remained behind grumbled about the massive influx of “Show Me” staters who were staking claims to homesteads, declaring if they could no longer be Arkansans, they’d rather have been Sooners.

Shame on the geographical illiterates who prepared this and even more shame on those editors who are AWOL, or equally illiterate.

If this was part of an evacuation route plan from The University of Texas at Austin, as has been indicated, then triple shame.

They should all be whipped with a wet map.

Best regards from the Landmass.