Do you ever have a racing mind?

Mine is going ninety miles an hour. I can’t sleep. All I can do is think of electrons, masses of electrons, and how they will be safely connected underground to feed new buildings while keeping existing buildings serviced and working properly so overhead lines can come down that are interfering with new construction. When I am not thinking of that, I seem to be thinking of ruxolitinib and how it is trying to do the same thing in a different sort of way, keeping existing cells functioning without damaging them while targeting an inflammation-causing protein (JAK7) that exists on the surface of the cancer cells which causes so many other problems to the CLL patient. Neither one is easy.

I have thought about this so much that I cannot stop thinking about it…the electrons, I mean, though when I have pause my mind returns to the ruxolitinib. It will not stop. It will not let me rest.

“What can I do, today?” I usually get around to asking myself when I am feeling overwhelmed, usually after having felt overwhelmed for too long. Perhaps it is the thinking through of the overwhelming that leads us to the point of focus that reveals what can be done TODAY.

If I allow myself to state the obvious, and I will since I can: none of us can much do anything today about what cannot be done today. We can only do today what we CAN, and we’d best not let today pass without getting it done. To continue to focus on what cannot be done today results in a paralysis, as if we were trying to swim through a lake of dark, thick, January sorghum molasses, and trying to peer through it at the same time. It’s pretty slow going, actually getting through it, and pretty cloudy, trying to peer through it…so how can I move now? What can I see that is close enough to me to actually be seen? That’s all I can do something about.

“Watch and wait,” Gooday and Hemosapien have told me, more than once. Then we no longer watched and waited. Now, we watch and wait, again, though the watch and wait is mitigated by the ruxolitinib: less waiting, more watching.

The ruxolitinib started off with a great big grin and a fine, “Howdy do!!!” It is not as warm and welcoming as it once was, as tell tale signs of an old nemesis or two have returned, and if not moved in have at least moved next door like the weird character played by Dan Aykroyd, the one that relentlessly intimidated the

character played by the late John Belushi in the movie NEIGHBORS. My blood is full of Dan Aykroyd-esque cells, and a bunch of wiseacres they are, too. I don’t think them nearly as entertaining as they think they are, but I don’t think they care. I am not sure of what they actually think, if I may be allowed to anthropomorphize my malignant B-Cells, other than they only think of their own survival.

Human body cells are like electrons in a way. When they are all working together as a team, they deliver the desired functions and keep us moving right along. When our body’s cells turn malignant, they are no longer part of the team. When electrons break free from the channels we created to harness them, the erupt en masse to the ground, damaging all sorts of things in the process, and our power goes out. While a response from the power company, or your local electrician, will eventually fix the electron problem, a call to the oncologist may not yield an equivalent result, though I daresay a call to the mortuary might conceal the nonequivalent result from view. How morbid of me!

“Sighhhhhaaahhhhhhh….” said many a person as their own eruption of malignant cells, like electrons gone bad, tripped their internal main breaker for the final time.

The sounds may be different, but the result is the same. The power is out.

That brings me to this: Until the power is out, we keep on moving, working, talking, resting when we can, working on something useful when we can’t, and taking advantage of everything that is still within our grasp: for what is beyond our grasp cannot take too much of our time in thought since it leads nowhere. I don’t want nowhere. I am gonna hang onto somewhere, just like that Jack Russell terrier I mentioned in Labor Day’s blog hangs on to the fried pork chop bone. When I can’t hang onto the bone, I suppose I will let it go, or have it taken from me even if letting it go wasn’t in my plans. Such is the way of nature. Resisting nature is like saying the electrons won’t go to ground if given the chance. Every device and structure we put in place is designed to prevent what the electrons naturally want to do. In the prevention of their wholesale return to the earth, we get them to do useful work in their controlled return to the earth, like a monkey attached to an organ grinder’s leash collects money from those in a crowd far more interested in the antics of the monkey than the music of the organ grinder. The electrons will do the work until given a chance to abort work and go to ground.

a peanut. He will do useful work to get the peanut. The electrons want to return to the earth and will do useful work if channeled so they return the earth in the controlled manner we prepared for them. Sometimes the monkey is given a chance to get too close to the coin bearer (the earth), whereupon he clamors up the leg of the coin bearer being entertained, pisses on him, angry that the one entertained gave him a coin and not a peanut. This is a monkey out of control, but you’d rather be pissed on by an angry monkey than be in the way of electrons that decide to return to the earth all at once. Neither one is pleasant, but no one ever died from being pissed on by a monkey. The same thing cannot be said for electrons allowed to escape their constraints.

“What does any of this have to do with anything?” you must be asking yourself.

“I have no clue,” might be my reply were you asking me, but you likely weren’t. However, since I am the narrator, the writer, the creator, the fore-ordaining god of this blog, I decided for you; it is my prerogative to decide what you’re thinking. In your own blog, you can be free to make your own choices.

I just hope the ruxolitinib is doing its job and continues to do so, even though I see signs of rebellion and I don’t want any trained monkeys pissing on my leg.

Are initial indications of an outbreak of the shingles similar to a malevolent, scheming, free-bladdered monkey? Are they similar to electrons finding a highly resistant unauthorized path that currently (a clever pun if there ever was one!) only lets the occasional one through to ground, though each successive electron slipping past makes the outlet larger?

The dutch boy sticks his finger in the hole in the dike. The water finds another outlet within reach, so he sticks in a finger from his other hand. The water then finds the next least resistive path, too far away, and too high, for the dutch boy to stick a toe in. He watches helplessly, fleeing only shortly before the dike has a colossal failure. He waited too late, though, being swept up in the resulting deluge, washed out to sea, lost amid an eternity of free electrons in the sodium chloride laced water, which though significantly less saline than monkey piss, has a volume a hundred billion trillion times exponentially greater than the cumulative total of all the primate bladders that ever existed.

Think about that for a while. Turn on your reading lamp. Turn it back off again. Turn it on once more. Did it work as you expected? If so, you can at least be thankful your electrons are channeled properly: or you can get a new lamp: or you can pay your power bill.

You can also be thankful that there is no monkey nearby. If there is, you’d better keep you eye on it.

If this has served no practical purpose for anyone else, it has served one for me.

I am sleepy now, sleepy simply from the thought of malignant B-cells, errant electrons, monkeys, ruxolitinib, and having warned you about them. 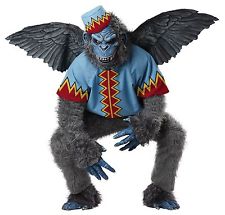 If you are up this late to read this, no doubt, it made you sleepy, too.

It could be worse. There could be monkeys. Or even extra worse…those flying monkeys from The Wizard of Oz.

I shudder at the thought.