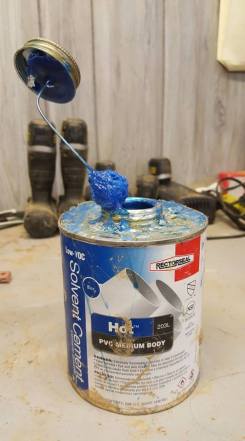 I saw this can of PVC cement inside the job trailer of the East Cox Road Substation we are building in Marshall County, Mississippi, near Memphis. Someone had placed it on a shelf in the job trailer. It caught my eye. I started to throw it away, but the more I looked at it, the more interesting I found it. I placed it on the counter and took this photo. Obviously, others on the job had found it interesting since they took great care to place it on display on the shelf.

I went outside where everyone was working in a drizzling rain, since it has rained, drizzling when not a monsoon, nearly continuously since Thanksgiving, making the job far more difficult that it could be, and asked them about the can. They all knew about it. They, too, had started to throw it away but found a poignant beauty, and if not beauty, then an accidental aesthetic commentary on the beauty of their work. We all agreed that we hoped a spilt can of PVC glue would be the only incidence of misfortune on this job, even though we have had to use some field fabricated scuba gear on some days to get through the mud and into the trenches. Like mules pulling cannon mired in mud through farm fields of France in the trenches of The Great War, we have been mired in mud for months, though we are glad we had no shells whistling through the air past us, or dropping on us like the dough-boys in France, though several mud bombs are recalled. Even mud-mired, one stops and admires the beauty of their handiwork and craftsmanship, even if the best representative of it that can be found at the moment is a spilt can of glue.

Plumbers and electricians the world over can vouch for the fact that far more glue is spilt in ditches than is actually applied to join pipe. It is the nature of the beast; you hold one section of the pipe in your hands, glue it, and drop the swab back in the brand new can, rush to get your pipe together before the glue sets, which is quicker than you wish it was, then look behind you and there it is, can askew at the bottom of the ditch, the victim of a precariously perched mud clod loosed to roll off the ditch’s edge as you were joining the pipe, knocking your glue can over. Once out, spilt glue can hardly be put back in the can.

We laughed about this, deciding as a group, that the glue manufacturers purposefully weight one side of the can so that it is imbalanced, causing it to tumble at the slightest provocation, or with no provocation at all: perhaps even at words it finds disconcerting, which may occur in a muddy trench. Usually it means climbing back out of the trench, slogging through the mud to the job material trailer, and slogging back with a fresh can and the promise to one’s self not to let that happen again. It is a pointless promise, as pointless as a new year’s resolution but not lasting nearly so long.

I needed some inspiration to write, having wanted to for several days. I struggled and struggled, wrote three blog posts not worth my time to write nor yours to read, and came up empty handed, captured by a dearth of words fit for nothing but the trash: birthed in nothing, saying nothing, and yielding nothing. Then, I saw this empty can of glue. That was all the inspiration I needed.

I did not cry over the spilt glue. Today, I was able to rejoice over it. It is as lovely an asymmetrical accidental artistic creation as I have ever seen.

It will remind many of their time on the job, and all the glue they spilt. I certainly spilt my share.

And, just so you’ll know: I like “spilt”. Spilt has a lilt that spilled envies and gets the point across just as well. Spilt is sort of a merging of spilled and spent. This can of glue was both at the same time. One might even say this particular can was as well spilt as the substation will be well built.

We take our joy where we can find it, even if it is in the mud.