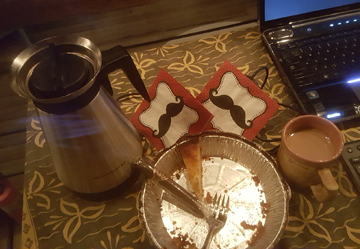 My life-long friend, David, and his wife Pat, have a wonderful home at Smith Lake in Alabama. That is where we are spending this weekend, celebrating July 4th, and my birthday. It’s good to have another birthday. Lots of folks probably wished they had had the chance at another birthday. I am thankful for mine.

Smith Lake is a beautiful place where steep rocky shoals come right down to the water line. There’s 700+ miles of shoreline and 75,000+ acres in this man-made lake that generates hydro-electric power for Alabama Power Company. Its clear, deep water has fabulous lake homes on the edges of its shores, some of those homes being a marvel of architectural excellence. David and I admired several yesterday as we rode about in his mahogany HackerCraft, itself a marvel of nautical architecture. As we admired beautiful houses on the shorelines, many others admired the graceful curves of the Hacker launch that sliced cleanly and deftly through the clear Smith Lake water, not planing and bobbing about on the surface, but its deep-vee hull cutting its way with a purposeful charm and panache like a real motor vessel from an earlier time. I am thankful to have friends who share their lives with me.

The photo shows my early, early morning plans as I sit on David’s deck overlooking the still, reflective water. A piece of bourbon pie, a pot of coffee, a nice morning cigar, two moustache-emblazened napkins provided in my honor, with my laptop and portable keyboard in the background. The bourbon pie is already gone. The second cup of coffee is being sipped. The cigar, clenched tightly between my front teeth, is being heartily enjoyed as I write this. Now when I say the cigar is being enjoyed, it is an understatement. It is being savored. It is being contemplated as the flavor of the wrapper, binder, and filler combine to give me the most wonderful, chocolate-nut-like flavor, changing in taste as it burns down. I am not smoking this cigar out of habit; I am smoking it for the sheer joy of it, and I am delighting in every puff.

“You shouldn’t be smoking that cigar,” I hear some of you saying. No, I shouldn’t, but I sure am enjoying it, thinking that later I might smoke another one. Whether you like or dislike the accused racist/sexist/imperialist Rudyard Kipling, or the accused racist Mark Twain, both of whose writing I absolutely consume with glee, I’d have them both, one on either side of me, critiquing my writing as we all puffed on our cigars. I’d have two glorious writers and two notorious cigar smokers by my side. I would not find the company, the criticism, nor the cigars at all distasteful.

After all, it was Kipling who said, “A woman is a woman, but a good cigar is a smoke.” Only one who loves a good cigar could comprehend the import of that.

Excuse me while I pour myself another cup of coffee.

I have been taking the ruxolitinib for two weeks. I have taken it faithfully according to the schedule Dr. Gooday provided to me. I have had some issues with common side-effects, but they seem to be subsiding. As the symptoms of the ruxolitinib subside, the symptoms of the CLL are also subsiding. My fatigue level has improved remarkably…and I mean remarkably. My lymph nodes are noticeably reduced in size and tenderness, and the nerves on which some of them impinged seem to be free from their former irritation. My bone and joint pain are nearly completely gone, the only remnant being a bit of soreness in the middle knuckle of my left index finger. I have had no night sweats. When I say no night sweats, I mean none, nary, zilch, zip, nada. The auto-immune malfunction of psoriasis and psoriatic arthritis are nearly completely gone: only one pea-sized scaly patch on my left elbow and the aforementioned soreness in my left index finger remain. It was a joy to play the guitar yesterday as my hands, though rusty, did not hurt a bit while playing as Piper and I sang a couple of duets for our hosts and friends. My, how I have missed my guitar.

I go to Houston next week for a follow-up visit with Dr. Gooday to see how the ruxolitinib may be being tolerated by my body with a series of tests. I am expecting everything to be good. It will be what it will be, but I am expecting goodness. I will not receive the thought of badness, not at this time, since today, I feel like my old self, my younger self, my pre-CLL self. Keep in mind that I am up at 3:00AM writing this, but I have issues with sleep that have nothing to do with CLL. And while being up at 3:00AM may make for a short evening, since I will be tired after having been up so early, it will not be the bone-wearying fatigue that makes me tired. I will simply be tired and ready to sleep. People who have never heard of CLL feel the same way at the close of every day; that’s why we have beds, mattresses, air conditioning, and the sleep that restores us, allowing us to dream our dreams and giving us the strength and clarity of vision to turn our dreams into a waking reality.

I mentioned air-conditioning. People used to sleep just fine before air-conditioning, but it has become a requirement these days in Mississippi and Alabama for a good night’s sleep. I don’t know how they stood sleeping in hot nights before air conditioning . . . maybe they slept on porches like the one I am am writing this from, as the cool night air circulates freely, and the slight murmur of the ceiling fan keeps the mosquitoes at bay since they are aerodynamically unstable enough so that they cannot deal with the artificial wind that cools me and my coffee in its cup.

“Say,” whispers Twain into my left ear, as if he didn’t want Kipling to hear, “You got another of those cigars you’re smoking?”

“Here they are, right over here on the table by David’s chair,” says Kipling, after a frantic search and now fumbling through the makeshift humidor that holds a weekend’s supply of fine cigars. Kipling picks one up, sniffs it, admires the toothiness of its wrapper, snips off the end, and fires it up.

Twain looks indignant at the lit cigar in Kipling’s mouth that he was planning on smoking himself. He says, this time purposefully loud enough for Kipling to hear, “That Kipling will smoke you out of house and home.”

“There’s more in there. I’m sure David won’t mind if you have another one, too,” I said, speaking for David, who is sleeping peacefully inside as I sit out here and write, also peacefully, enjoying the words as they come and the response of my formerly sore fingers now flying over the keyboard with a purpose, not fat-fingering it in an uncontrollable bungle as has been so common in the recent past, and enjoying the last few puffs of this cigar and the company I imagine having with me.

I think I’ll pour up one more cup of coffee, get me another cigar, and join in the lively debate of the trials and tribulations of writers and how they suffer from subjects to write about, of the perils of publishers and the sanctity of copyrights. Maybe I’ll get out my guitar and sing them a song or two. Maybe I’ll wake up and realize that this is all a dream, and I’m not really here, that Smith Lake is not really real, and that the beauty, love, and joy of my friends and family that surround me are just a fleeting REM sleep moment having no relation to reality.

Nah! What I can do now is go back to sleep for a while, perhaps right after I see the sun’s approach to the horizon, knowing that this is real, other than the visit of my late-night/early-morning guests, though as I think of them and the words they wrote that I treasure so much, I think perhaps they are really here with me in some way, at least through the work they left behind that brings me so much pleasure, just like this coffee, the bourbon pie, and what is left of this cigar, now gone cold, but still clinched between my teeth and tasting just as good as it did when it was lit.

I look over at Kipling and Twain, rocking in the deck chairs, engulfed in a cloud of cigar smoke, flailing their arms about in a heated discussion about the horrors of editors and critics, thinking that, perhaps, they should bring their own cigars next time. I make some mention of this, and red-faced in chagrin they promise to do so, and perhaps also bring along some ruxolitinib if they can find it.

“Can I get a couple of those napkins?” Twain asks as he twirls his own moustache.

Welcome back, if only for a time, old self. It sure is good to see you!