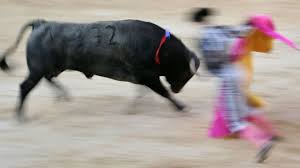 There is the old expression, “Caught on the horns of a dilemma.” We’ve all heard it before.

It’s as if a dilemma is an entity unto its own, having horns like a bull in the ring with a Matador. It’s not just one horn he must avoid…there’s two of them. Though there’s four dangerous hooves and the crown of the bull’s head, it’s the horns that can inflict the most damage, deliver the fatal wound. It’s the horns we fear will catch us. If the bull moves as the matador expects, then the matador can maintain control. It’s the unanticipated that catches him off guard. The matador never expects to trip on his own feet, which would result in the bull acting as expected, the matador having done the unexpected to himself, thus he is caught on the horns of a dilemma of his own making.

That’s the nature of a dilemmas. Some are waiting out there to gore us, unexpectedly. Some of them we create ourselves, since no matter the outcome, it was the matador who chose to challenge the bull. Though the outcome overwhelmingly favors the matador, it is not always the case.

I am not defending the ancient sport of bullfighting. It is what it is. You can have any opinion about it you choose. I do not care if you are for it or against it. I didn’t invent it, have never been to a bullfight, nor am I likely to go to one. It has been around since Roman times, considered savage and cruel by many, and exciting by many others who might be counted among those who enjoyed 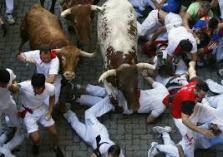 attending gladiator fights in ancient Rome. It’s not the death of the bull they came to see…it’s the potential death of the matador that brings the spectators to the bullfight. No one would attend the Running of the Bulls if not for the chance to see someone tossed by the bull. No one would go to Pamplona to see The Running of the Roosters, as chickens ran down streets filled with brave men facing nothing but the possibility of slipping on a fresh pile of chicken shit. Auto racing has a similar attraction. It’s the dangerously spectacular we want to see, we hope to see. It’s the possibility of seeing others caught on the dilemma’s horns as viewed from a safe place that sells tickets.

Occasionally, a member of the Flying Wallenda family has demonstrated his incapability of flight, dropping like a stone, rather, as they work their death-defying act. If a Wallenda was walking across t

he street, no one would pay much attention, though I daresay more people have been killed crossing the street than walking a tightrope between high spaces. The Wallendas choose their dilemma: death defy or don’t eat in the manner to which they’ve grown accustomed.

Sometimes, in our personal lives, dilemmas overtake us. We did not choose them. We did not create them. We are just suddenly faced with the necessity of having to make a difficult choice between two things, unpleasant at best, or deadly at worst.

“Why did we have to invite Uncle Walter to Thanksgiving dinner?” Mort asked his wife, Sal.

“Walter is YOUR uncle. He has no where else to spend Thanksgiving. You should be ashamed of yourself,” chided Sal.

“He can spend Thanksgiving with his own children,” Mort replied.

“Well, you know he and Susie aren’t speaking, and Todd lives in Fairbanks, so it’s too far and too cold for Uncle Walter to go there. He’ll be just fine with us,” said Sal as she checked on the turkey in the oven. “Now, go away and leave me alone. Uncle Walter will be here in a minute and you must entertain him. I don’t want him in the kitchen bothering me while I am cooking. He’ll be poking his finger in the sweet potato casserole if you don’t watch him every second.”

“See! You don’t want him here either!” declared Mort.

Sal turned around, armed with a wooden spoon which she shook in Mort’s face with one hand, the other balled into a fist and firmly anchored on her left hip. She leaned forward, threatening Mort with the spoon. “It’s not that I want him here; it’s that I can’t bear the thought of him being alone on Thanksgiving. You answer the door when he comes. Keep him in the den. I don’t want him in the kitchen. I’ll come out a greet him when you call me.”

Uncle Walter was a boor as well as a bore, those inseparable two. He knew everything about everything and told you so, repeatedly. He told off-color jokes at the dinner table, sometimes the same one twice in succession, figuring that it was so funny everyone wanted to hear an instant replay. He would critique the food, comparing every dish to the impossible standard of how Mort’s late grandmother had prepared the same dish, which was far superior to the way Sal prepared it, even though the one set before him, prepared by Sal, would be stuffed into his mouth as fast as he could fill it and dribble it onto the carpet and down his chin, using the table cloth for his napkin, or his sleeve.

He had gas, which he passed when he pleased, commenting about the nature of its tone and perhaps its pungency. If he had a scorecard like an Olympic judge, he would likely hold it up and score each fart as if a gymnast had just finished a dismount from the parallel bars, or a diver from the ten meter platform had completed the perfect reverse triple twisting triple-and-a-half somersault, leaving not a trace of a splash on her perfect, needle-like entrance into the water. “That one was a nine point five,” he’d shout, laughing insanely, encouraging everyone else to do so as he orally imitated his recent rectal flatus. No one thought it was funny at the dinner table, except Uncle Walter.

During dinner, he’d bring up politics, goading everyone into some sort of comment and then letting them have it with both barrels, everyone stupid for thinking anything other than what he thought, or voting differently than he voted.

He’d bring up religion, being an ardent religionist, having all the answers to questions that have plagued serious theologians for centuries, though of course never having read anything that anyone of them ever wrote since he had never read a book of any sort. St. Augustine or Thomas Aquinas couldn’t get in a word edgeways with Uncle Walter. The only publications he had ever perused had fold out center pages, or tip sheets on the best horses. If he looked at a newspaper, it was to see the box scores and the betting odds on upcoming fights.

In spite of that, sweet-hearted Sal did not want Uncle Walter spending Thanksgiving alone, so she had made Mort invite him to dinner, again, as she did every year. Uncle Walter never even said thanks as he departed, leaving in his wake only the smell of cigar smoke and fouled methane. He was Mort and Sal’s annual dilemma.

Eunice, on the other hand, was in a hospital on that same Thanksgiving day, wrestling with the decision of whether to have brutal surgery and aggressive chemotherapy and radiation which would at best allow her to live a misery of six months or so, they had told her, or whether to just call in hospice care to live out her life in as much comfort as they could provide for a month or two, or even three, before her metastasized melanoma would claim her. No one at her house would be enjoying Thanksgiving dinner, either, though I’d bet a dollar to a dime they’d rather be dealing with an Uncle Walter than what they were facing.

Dilemmas come to us all the time. Some we choose. Some we don’t. It’s the horns we hope to avoid being impaled by, but sometimes the choices we must face are just too unpredictable, too sudden, coming upon us unaware and unprepared; some, one just cannot prepare for, and neither choice is pleasant. Some are deadly.

“Boy, that one was deadly!” shouted Uncle Walter as he returned upright in his chair after having leaned over and letting one rip. “How’d you score that one, Sal? Pass me those sweet potatoes. I’d say that is a perfect ten.”

Sal acted like she had heard nothing and passed the sweet potatoes to Uncle Mort. He spooned them liberally onto his plate, his third helping. “My mother’s sweet potatoes were perfect. Delicate, touched with a sweetness not to be found in any other. But these….these….these sweet potatoes….”

“Yes?” asked Sal, dryly, glibly. “Go ahead, tell me about the sweet potatoes…please.”

Uncle Walter said softly, and he never spoke softly, but this was uttered as deliberately and tenderly as he could possibly muster, “Sal, I never had any that were as good as these

. They are the best. I’d score them a perfect ten.”

It was the only time Uncle Walter had ever made any positive comment about Sal’s cooking. It was the only way he could possibly think of to say, “Thank you for having me at your home.” The words were not actually there, but the unspoken intent was impossible for Sal to miss. For the first time, ever, Mort’s Uncle Walter brought a smile to Sal’s face. It nearly brought a tear to her eye. The rest of the dinner they enjoyed mostly in silence, but with some light, enjoyable conversation, Uncle Mort even contributing in a manner that did not cause recoil, which was another first. There was something besides a boor in there. The boorish exterior was an iron facade of a vulnerable interior, difficult to penetrate, but that facade had a few cracks in it if one had the endurance to find them. Lots of dilemmas are that way.

Take this assurance from Eunice: the dilemma never cares; it just hones its horns.

PS: The photos are all by others. I lifted them off the internet.