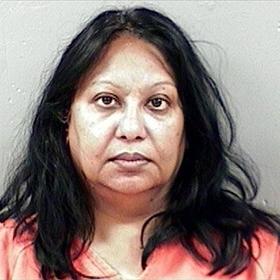 Take a good look! The woman shown at left is (the former Dr.) Meera Sachdeva, an oncologist who operated the Rose Cancer Center in Summit, Mississippi. She was charged with unsafe medical practices (using dirty needles for IV infusions, diluting chemotherapy agents given to the patients who trusted her with their lives, and bilking Medicaid, Medicare, and private insurance out of millions of dollars. You may have met her here earlier.  On July 13, she pleaded guilty to fraud. She had previously surrendered her license to practice medicine and had been repeatedly denied bail because she was (rightfully) considered to be a flight risk. The naturalized US citizen routinely traveled to her native India where she has family and considerable assets. $6 Million and some real estate were seized here in the US. Her (apparently considerable) assets in India have not been reported.

Monica Weeks, the owner of Medical Billing Group in Madison, MS, who handled the billing for the Rose Cancer Center also pleaded guilty to fraud. Her attorney said, “The conduct to which Monica Weeks pled guilty today involved nine patient charts and less than $20,000…The facts the government recited to the court as the basis for Monica’s plea do not include any action which jeopardized the health or safety of a single patient. Ms. Weeks has accepted responsibility for her actions, and she and her family look forward to putting this entire ordeal behind them.” His words seem to be a thinly disguised attempt to get the courts to consider a mild sentence for Ms. Weeks, but it is his job to do all he can to help his client. That’s what I’d want MY lawyer to do. So would you.

Surely, Ms. Weeks looks forward to getting the entire ordeal behind them; this is what criminals always say they want. The patients of the Rose Cancer Center wanted to get the ordeal of the cancers and its sometimes extremely harsh treatment behind them, too. Maybe Ms. Weeks did not directly endanger the lives of Sachdeva’s patients, but in my opinion her complicity did, since she knowingly furnished fraudulent information about medical practices and then, according to the justice department, tampered with evidence to hide her guilt. Ms. Weeks is perhaps more culpable for the bad care of the Rose Cancer Center patients than her plea admits; perhaps as culpable as (the former Dr.) Sachdeva. Add to this the fact that, though she only plead guilty to $20,000 of fraud, her work assisted the Rose Cancer Center in defrauding you, me, our government (it is OUR government, folks), and our insurers out of over 15 MILLION dollars. I hope Ms. Weeks gets every opportunity to reflect on her actions while serving a  prison sentence. Maybe they will make her the poster child for the hazards of medical billing malfeasance. She is a thief, a felon, and made a choice to deceive others for her own financial gain at the possible cost of other people’s lives. “Getting this entire ordeal” behind her will not change that. Look in the mirror, Ms. Weeks. Do you like what you see? Are you sorry for your crimes? Or, perhaps, you are sorry that your crimes caught up with you? You regrettably chose the path down which you walked. Perhaps your guilty plea to this lesser charge was just because the prosecutors had so much more evidence against you. I suspect that is exactly the case.

Both Sachdeva and Weeks are awaiting sentencing on October 1.

When the evidence is overwhelming, any good lawyer will bargain for reduced charges in exchange for his client’s guilty plea.

I regret I could not find photographs of Weeks and McCoskey that I could verify were theirs, or you would see them here. I’d like to see Ms. Weeks at the supermarket, perhaps. Maybe I’d point her out and say to everyone within earshot, “This is the woman who pled guilty to merely defrauding the government of $20,000 and falsifying just nine medical charts.”

She might sigh and say, “I just want to get this behind me.” If she ever were to be diagnosed with cancer, I’m sure she will be very vigilant about verifying that she is receiving the proper doses of her chemotherapy. She may even hope that the billing agent for the clinic she chooses for her treatment might report any irregularities rather than profit from turning a blind eye, then trying to hide the evidence.

And SACHDEVA?? Her nefariously wicked behavior is beyond consideration.

I also wonder where were the nurses at the Rose Cancer Center who knowingly reused old needles for IV infusions? Why didn’t they refuse to do so? If you were a nurse there, I’d like to hear your explanation. Were you afraid you might lose your job? This practice was not a simple mistake; this was purely wicked. Some nurses may not have known, but others certainly did. Which one were you?

If you think I don’t know what I am talking about, please enlighten me.

Sachdeva certainly made an indefensible bad turn. I wonder, at what point, though, did Weeks decide to participate in fraudulent activities? I wonder what the nature of her reimbursement from Sachdeva’s clinic was? Did she start out with the intent to deceive? Did a little leaven get to the whole loaf? At what point did her personal integrity fail her? If she were not caught, would she still be at it?

These are things we should all ponder about ourselves and why we must always be on guard to preserve and protect our integrity. Ms. Weeks is a human being, and none of us are incapable of making the same mistakes as she. How far would we allow ourselves to go? Would we refuse to continue our fraud? Would we turn ourselves in? Or would we continue to enjoy the fruits of our fraudulent behavior, behavior which we knew was damaging to the lives of innocent, seriously ill people?

Unfortunately, Weeks did not blow the whistle. Nor did McCoskey. The whistle blower was a hospital in McComb, Mississippi, that treated several of the Rose Cancer Center’s patients who presented with the same bacterial infection and reported this to the State Department of Health which investigated the clinic for unsafe health practices, which then led to the DOJ investigation. Had this not happened, I suspect the fraud would still be continuing, and Medical Billing Group would still be doing business as usual while cancer patients would be continuing to receive diluted doses of their chemotherapy agents and being infused with dirty, previously used IV kits.

What a terrible indictment of the depravity of humanity.

As a cancer patient, do you think this has made me a bit angry? Excessively so?

I have not yet begun to be angry. I am actually holding back. The fury this arouses in me is a poison I had best not drink of too deeply. May the Lord show His most profound grace to those patients of the Rose Cancer Center, and may He have mercy on those who mistreated them so. I reckon the mercy I would show would be a bit South of the Lord’s, but then again, that is what His grace is all about. It is a wonderful mystery to me.

I am done for now, but will report back after their sentencing. It could be that I am infuriated all over again. Hopefully, justice will be served.

Below is the text of the US Attorney’s office announcement.

Sachdeva, who owned and operated Rose Cancer Center in Summit, pled guilty to submitting claims for chemotherapy services that were supposedly rendered when she was out of the country. Weeks, who owned and operated The Medical Billing Group in Madison, pled guilty to conspiracy to commit health care fraud by covering up false claims made by Sachdeva that were scheduled for an audit.

According to the indictment in this case, Sachdeva is alleged to have billed for more chemotherapy drugs than she actually purchased from drug suppliers from 2007 to 2011. During the plea hearing, the Assistant United States Attorney told the court that if the case had gone to trial, the government would have proven that “[t]he defendant would prepare…chemotherapy treatments by injecting the prescribed chemotherapy drugs into a bag of fluid that would then be connected to the patient via a ‘chest port.’ Each patient believed that they were receiving an amount of chemotherapy medicine that was equal to the amount being billed to their respective health care benefit programs. The defendant was not providing each patient with the fully prescribed dosage of many of the billed chemotherapy drugs.”

The case was investigated by the United States Department of Health and Human Services Office of the Inspector General, the Medicaid Fraud Control Unit of the Mississippi Attorney General’s Office, and the Federal Bureau of Investigation.